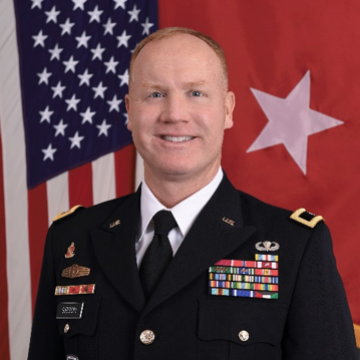 Brigadier General Brian W. Gibson entered the active Army in 1992 after graduating from Wheaton College with a Bachelor of Science degree in Mathematics and receiving a commission through the Reserve Officer Training Corps. He also holds a Master of Arts degree from Webster University in Computer Resources and Information Management and a Master of Arts in National Security and Strategic Studies from the Army War College.

BG Gibson is married to the former Cheryl Marie Lueckenbach. They have two children: Josiah and Simon.