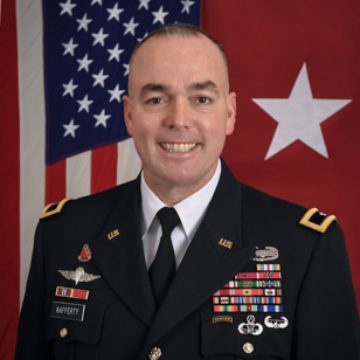 BG John Rafferty, from Great Falls, Va., enlisted in the U.S. Army in 1987 and served as an infantryman with the 8th Infantry Division in Mainz, Germany before attending Longwood University in Farmville, Va., where he was commissioned as a field artillery officer after graduation. His first assignment was in the 18th Field Artillery
Brigade (Airborne) at Ft Bragg, N.C., as a fire direction officer and platoon leader in B Battery, 5th Battalion (Air Assault), 8th Field Artillery. BG Rafferty then joined the 3rd Battalion, 75th Ranger Regiment at Ft. Benning, Ga., as the B Company fire support officer before moving to Marine Corps Base Quantico as an exchange student at the USMC Amphibious Warfare School.

BG Rafferty was next assigned to the 1st Armored Division in Baumholder, Germany and served as a division AFSCOORD and Division Artillery S4 before commanding B Battery, 1st Battalion, 94th FA (MLRS), and then Headquarters Battery 1st Armored Division Artillery. In 2002, he returned to the 75th Ranger Regiment to serve as the fire support officer for the 1st Ranger Battalion and deployed several times in support of both Operation Enduring Freedom and Operation Iraqi Freedom. BG Rafferty was then selected to attend the UK Joint Services Command and Staff College in Shrivenham, England.

Following the staff college, BG Rafferty was assigned to the newly formed 4th BCT (Airborne), 25th ID at Ft. Richardson, Alaska where he served as the BCT fire support coordinator, plans officer, and BCT S3 during Operation Iraqi Freedom. Upon redeployment he served as the operations officer for 2nd Battalion, 377th Parachute Field Artillery Regiment.  In 2008, BG Rafferty was assigned to the Office of the Chief of Legislative Liaison (OCLL) in Washington, D.C. where he served as the operations and readiness liaison to the U.S. Congress.

From February 2010 until June 2012, BG Rafferty commanded the 1st Battalion, 319th Airborne Field Artillery Regiment, 3rd BCT, 82nd Airborne Division as part of the Global Response Force. He then attended the U.S. Army War College where he completed the Advanced Strategic Art Program before returning to OCLL as deputy chief of the House of Representatives division before deploying to Kabul, Afghanistan as the legislative advisor to the Commander, International Security Assistance Force/ U.S. Forces-Afghanistan.

BG Rafferty assumed command of the 18th Field Artillery Brigade at Fort Bragg, N.C., in June 2015 and deployed with the brigade headquarters to serve as both Joint Fires Cell-Syria and the CFLCC Force Field Artillery Headquarters in support of Operations Inherent Resolve and Spartan Shield. After relinquishing command in June 2017, he served as the executive officer for the Director of the Army Staff at the Pentagon before moving to Fort Sill, Okla., to assume his current duties as director of the Long Range Precision Fires Cross Functional Team.

His education includes a Bachelor of Arts from Longwood University, a Master of Arts from King’s College London, and a Master of Strategic Studies from the U.S. Army War College. BG Rafferty has been married for 26 years to the former Tracey Lowery of South Boston, Va. They have two children: daughter, Erin (19) a student at the University of Virginia, and son, Evan (18) a senior at MacArthur High School in Lawton.