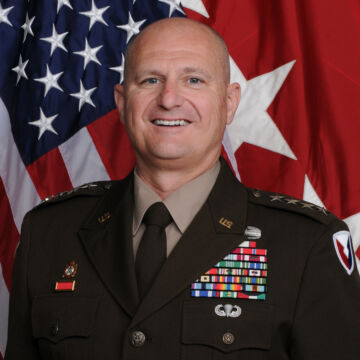 General Daly served three years as the Deputy Commanding General of Army Materiel Command in his previous assignment. He managed the day-to-day operations of the Army’s logistics enterprise, and also served as the Senior Commander of Redstone Arsenal, Alabama.

He served as the Commanding General of Army Sustainment Command at Rock Island Arsenal, Illinois, and as Army Materiel Command’s Deputy Chief of Staff, overseeing the roles and functions of the Headquarters staff.

General Daly was commissioned as a second lieutenant in the Ordnance Corps upon his graduation from the United States Military Academy at West Point in 1987. He earned Master’s Degrees in Business Administration from Gonzaga University, and in Strategic Studies from the U.S. Army War College.