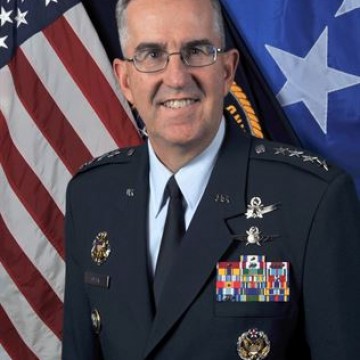 Gen. John E. Hyten is Commander of U.S. Strategic Command (USSTRATCOM), one of 10 Unified Commands under the Department of Defense. USSTRATCOM is responsible for the global command and control of U.S. strategic forces to meet decisive national security objectives, providing a broad range of strategic capabilities and options for the President and Secretary of Defense.

General Hyten attended Harvard University on an Air Force Reserve Officer’s Training Corps scholarship, graduated in 1981 with a bachelor’s degree in engineering and applied sciences and was commissioned a second lieutenant. General Hyten’s career includes assignments in a variety of space acquisition and operations positions. He served in senior engineering positions on both Air Force and Army anti-satellite weapon system programs.